10 years of TeamAlert in the Netherlands - road safety pioneers!

The leading, the biggest and the most active youth and road safety organization in The Netherlands, TeamAlert has reached its ten year anniversary this month! On 6th March 2013, the organization reached a decade of operations and we take this moment to congratulate their work and look back at some of their revolutionary, ground breaking and unique campaigns.

From and for young people - Team Alert on Facebook.

TeamAlert is one of the original organizations for youth and road safety in the world. They championed the cause thirteen years ago in 2000 and have being going strong ever since. Since 2003 TeamAlert became an independent youth-led organization for road safety and have ran a range of expertly reviewed campaigns in the The Netherlands. They continue to be an authority on youth and road safety issues in the country and beyond!

"TeamAlert is necessary because traffic crashes are still the number one killer among young people. TeamAlert was formed as a project in 2000 on the initiative of the former Transport Minister, Ms Netelenbos. The Minister gave 5 youngsters the task activities and campaigns to devise road safety under the attention of peers".

The young people came up with the name "TeamAlert" and in three years they formed the foundations of the organization, on the 6 March 2003 TeamAlert was founded. The 10 years that followed countless young people have worked to convince their peers themselves of safe traffic behavior, a true peer-to-peer model. 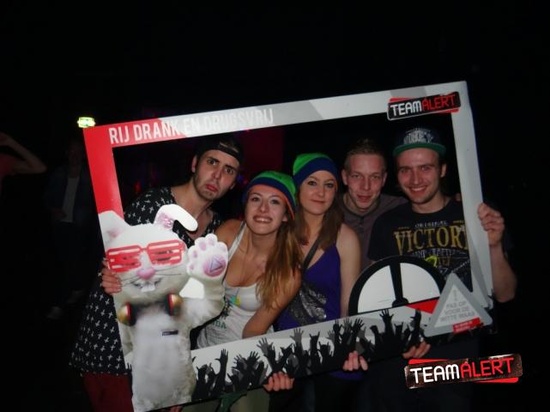 One of TeamAlert's many campaigns, the Witte Waas, promoted at festivals across The Netherlands. Translated as 'White Blurb' promotes awareness of an anti drug driving message amongst youth in traffic.

TeamAlert now employs more than 20 office staff and about 70 education and information staff. Many projects have been implemented in schools, festivals, nightclubs and on the street and the organization continues to reach many more young people. They said, 'It works pretty well, because in 2012 we reached 117.000 people with our road safety messages and in this jubilee year we reach over 125.000 people'.

YOURS Director Mr Floor Lieshout began his road safey journey in this organization, he said,

"I am so proud that TeamAlert has reached its ten year anniversary. Working with this organization is where my passion for road safety started and where it is rooted. You could say that YOURS is an indirect result of my work with TeamAlert and many of our focuses and principles are similar. I wish them many more successful years".

Read our Spotlight on TeamAlert